Which ingredients does the “magic potion” countervailing power consist of?

We all know the stories of Asterix and Obelix, who, with a mixture of belligerence, self-confidence, shrewdness, cunning and not to forget the dosed use of their magic potion, defy the superiority of the Romans again and again and stand up to them in their legendary Gallic village. There is also a superiority in the conflict of interests between capital and labour. It is an asymmetrical, unequal struggle for participation and fair distribution under capitalist conditions. This makes it all the more important to know exactly what the ingredients are and to be able to analyse them, from which we can brew our „magic potion“ „countervailing power“.

The working group Strategic Unionism provides a very valuable theoretical basis for determining which „power resources“ are available to trade unions and works councils as models (source: see reading tips at the end of the article!). Here, a distinction is made between four central power resources, each of which is then further differentiated in itself: structural power, organisational power, institutional power and social power.

Structural power – the power to „disrupt“: Corona shows us how!

Structural power is based on the fact that wage earners play a central role in the economic system. This also results in the power to „disturb“ the economic process in two ways.

The first form of structural power is the power of production – work stoppages and other actions can result in high costs for companies. Corona shows where the system is particularly vulnerable. The virus has succeeded in a few days in doing what transport workers, train drivers and dock workers are otherwise capable of doing, namely bringing the flow of goods to a partial standstill. If wage earners can influence this, we speak of circulatory power.

There is a second thing we take away from the Corona crisis: If teachers, kindergarten teachers, nurses, gastronomy and community catering and many more are not available, then everyone else is restricted in the performance of their gainful employment. Corona also illustrates this resource of power, which is called reproductive power.

Structural power of wage earners has another form – market power. Employees have it through special and rare qualifications, or in full employment. In contrast, the market power of wage earners decreases when unemployment is high. Example – cooks: Before the crisis there were reports of restaurants that could not open in the winter season because they could not find cooks on the labour market. The media reported on generous overpayments in this area. With Corona, the market power of the cooks is gone for the time being, because gastronomy and hotel business will suffer from Corona for a long time to come.

Organisational power – this is what most people would think of first!

Contrary to structural power, which results from mere participation in economic life, this is about the bundled, collective union to form a power factor. The Jena power resource approach refers to the three levels of production/company, trade union and workers‘ parties. In assessing the actual power of these mergers, it is by no means only the „power of numbers“ that matters, or as it is called elsewhere, „the will to pay“. Factors of this power resource that are at least as decisive are organisational efficiency, infrastructure resources, member participation, emotional ties, close social networks, shared everyday experiences and good educational work. The latter is also the subject of this blog.

Nothing was given away, everything had to be fought for, some of it „bloody“ in the truest sense of the word: May 1st and other days off, health, accident and pension insurance, collective agreements, chambers of labour, company co-determination, 40-hour week, five weeks holiday, lay jurisdiction at the labour and social court, co-determination in supervisory boards, youth councils of confidence, countless company agreements, employee protection and much more. This resource of power also shows resistance to short-term political economic fluctuations.

However, institutional power is not an impregnable fortress. The neo-liberal turn in the 1980s and the right-wing populist-conservative supremacy of these days show it: even the rights of wage earners, which are taken for granted, are ice-coldly attacked and called into question when the political power relations allow it. Almost all the above-mentioned achievements have been attacked in recent years.

Social power – we need „narratives“ that appeal to a social majority!

The topics of works councils and trade unionists cover more than income and working hours.  We have ideas about how a society should be designed that facilitates fair participation for all. And here we make the painful experience that seemingly obvious interests of a clear majority, such as higher tax contributions from large fortunes, do not have a majority in political and public discourse. Numerical minorities and interest groups manage to gain dominance in the public discussion. Social power rests on two pillars, the first being cooperative power. In order to become socially assertive, trade unions must form broad social alliances (e.g. Alliance for the Free Sunday).

Discourse power as the second pillar arises when broad groups of the population perceive our demands or our stories of injustice as morally legitimate and they correspond to their feelings of justice.

How can the power-resource approach find a distinct place in our educational and counselling offers?

All mentioned (as well as other) books can be ordered HERE in the ÖGB-Verlag Webshop free of charge.

Ich will per E-Mail am Laufenden gehalten werden! 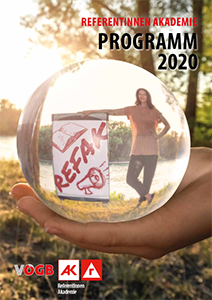